There are two parties in every court case. So naturally, when a case is decided, one party will win and one party will lose. An appeal gives the party who loses an opportunity to challenge the decision. However, an appeal does not stop or delay the trial court’s original order.

The option to appeal a court’s decision is an important right in our judicial system. But there are strict rules to make the appeal process the same for everyone. The court must also follow strict rules and judge each appeal by the same legal standard.

There are two basic questions to guide a person who wants to appeal:

Here is an overview of the requirements to appeal and critical things to consider before filing an appeal.

The Requirements to Appeal

These simple categories help determine if a decision can be appealed. All three of these requirements – who, what, and when – must be met to appeal a trial court’s decision.

WHO. Generally, the person who wants to appeal must be the party who lost in the trial court. In legal terms, the party filing an appeal must be “aggrieved” by the decision. A friend or relative cannot file an appeal on behalf of a party to the case. A person who is affected by the decision, but who is not a party to the case, cannot file an appeal. There are some exceptions, such as a legal guardian filing on behalf of a minor child.

WHEN. The decision must be appealed within the time allowed by the court. The deadline is different for every case, but generally it is 60 or 180 days after the judge’s decision. If a party is considering an appeal, he or she should ask the trial court to provide a deadline to file an appeal. California Rule of Court 8.104 includes general guidelines for when an appeal must be filed.

The Legal Burden of Proof

To challenge a trial court’s decision, an appeal must prove two things:

It is hard to win an appeal. In California, less than 20% of all civil appeals succeed in reversing the original ruling. That’s because the law says the Court of Appeal must presume that the trial court’s decision was correct – unless the appellant can prove the court was incorrect.

An appeal must include a persuasive legal argument that convinces the Court of Appeal that the trial court made a legal mistake and it caused harm to the appellant in the decision. Generally, an appeal will only be successful if the appellant or their attorney made an objection during the trial to preserve the issue for appeal.

Examples that are valid legal arguments to appeal

Examples that are not valid legal arguments to appeal

Examples of judgments and orders that can be appealed

What to Consider Before Deciding to Appeal

Just because a decision can be appealed doesn’t mean it should be appealed. It takes a lot of time, money, and effort to go through the appeal process.

An appeal is not a new trial. The Court of Appeal will only consider evidence and testimony in the record from the original trial.

When someone decides whether or not to appeal, he or she should carefully review the record of the trial for potential legal issues. It takes time to research and write a persuasive legal argument. The court can fine people who file appeals without legal basis. The party who loses in the Court of Appeal may have to pay some or all of the other side’s court costs and legal fees.

There are strict rules and requirements to follow throughout the appeals process. This includes doing all the paperwork correctly, providing a record of what happened in the trial, and writing briefs. This also includes meeting deadlines. If the appellant misses the deadline to file an appeal, the appeal will be dismissed.

If there’s an appealable order and the party who lost plans to appeal, the next step is to file a notice of appeal with the trial court where the case was decided. The notice of appeal begins the appeals process. It lets the court and the other side know that the judgment is being challenged.

Find a lawyer referral service in your area

How do I know if there’s an appealable order?

The California Code of Civil Procedure section 904.1 includes a full list of orders and judgments that can be appealed.

You can also consult with a lawyer or contact your trial court directly to determine if you have an appealable order.

Can a case be appealed if there was no trial?

Cases are regularly dismissed without a full trial. Here are some general considerations for an appeal of common types of dismissals.

Demurrer.
A demurrer ruling is an order but by statute it may be appealed. The order must say the case is dismissed. The Court of Appeal usually only looks at the complaint and assumes all the factual allegations are true in order to rule on whether the complaint states a cause of action.

Summary judgment.
A superior court’s ruling granting summary judgment is an order. A party seeking to appeal the ruling must first get a judgment based on that ruling. The facts are taken from the evidence before the trial court at the time of its ruling. A common issue for appeal is whether the trial court was correct that there was no genuine dispute as to material facts that must be resolved at a trial.

Do I need a lawyer to appeal?

No. However, it will help to at least have an initial consultation with a lawyer who specializes in appeals. A lawyer can review the case to determine if there’s a legal basis for an appeal, and what the legal argument(s) might be. It can save you time and money in the long run to consult with a lawyer, even if you ultimately choose to represent yourself in an appeal.

How do I find more help or an appeals lawyer?

The California Courts website has a lot of information about lawyers and legal help.

You can also visit a law library to do legal research.

If you need help finding a lawyer, the California Bar Association can connect you to a lawyer referral service that connects people with lawyers in your area.

Are there other legal options besides an appeal?

There may be other legal options to help a person address what you feel went wrong in your trial. It may be possible to offer a motion or request to ask the trial court to cancel or reconsider the judge or jury’s decision. Also, some courts have a mediation or settlement program that can help the parties reach an agreement. It is possible to pursue mediation even if an appeal is filed within the deadline. Learn more about other legal options besides an appeal

What happens to the original court order during an appeal?

There are generally two types of civil cases: 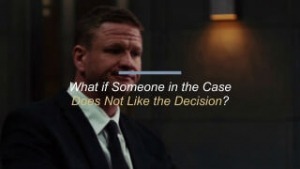 Vídeo: Preserving the Record on Appeal, 5:33